I’ve been using gnuplot since.. like forever. It is one of my best friends in plotting data and discovering what is going on. But for all its greatness, you do tend to run into a wall - once you step outside the things gnuplot is good at, suddenly large heaps of awk, sort, unique and odd shell scripts are required to get to the next level. This is no criticism of gnuplot - it is great for what it is for.

And to be sure, gnuplot’s fitting abilities for example go beyond what could be expected of a plotting package. While sometimes quirky, the fit f(x) functionality has helped me discover a lot of interesting things.

I love gnuplot. But it is time to move on.

April 2021 update: Nicolas Burrus wrote a wrapper that creates Matplotlib notebooks from simple data files. This could help you get started too.

In this post, I hope to provide a highly accessible introduction to Matplotlib and Pandas which, together, blow gnuplot right out of the water.

Note: I am by no means an expert or seasoned user of Matplotlib and Pandas. In fact, I started this trek only a few weeks ago. If you spot any mistakes or “worst practices” in here, please let me know (bert@hubertnet.nl) and I’ll fix it. A few actual experts have looked at this page and did not immediately report big problems.

This article, sample datasets and a notebook to explore Matplotlib & Pandas are available on GitHub

Launch gnuplot, enter plot sin(x).. and you have a plot. This is why gnuplot fits so well in the life of a system administrator or software developer. Want to plot the number of context switches of your system? Just do this: 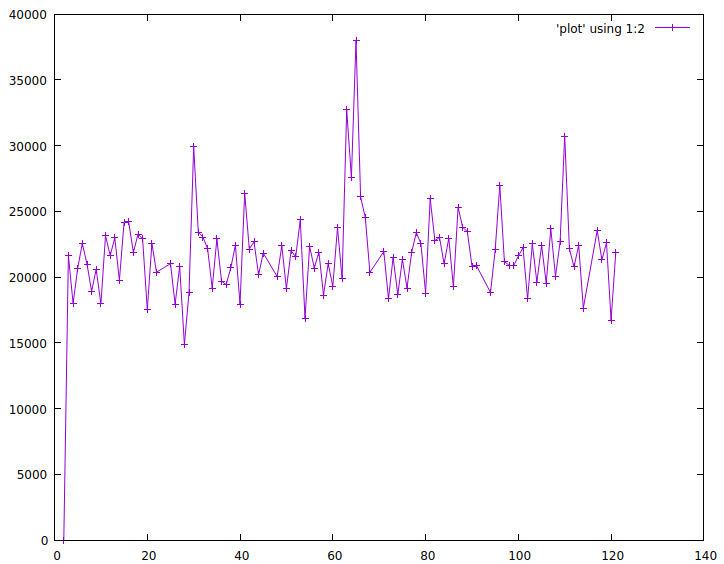 Gnuplot is ready to go. Other graphing solutions require configuration, web browsers and other newfangled things. It is not easy to let go of such commandline ease of use.

The example above however did show that quite a lot of the work gets done outside of gnuplot - we needed a somewhat awkward awk program to preprocess the output of vmstat before gnuplot could get to work. Gnuplot meanwhile has no idea what it is plotting - it only sees numbers.

Gnuplot itself can read data from a prepared file. In the brave new world of Pandas and Matplotlib, data storage is separated from the actual graphing as well. But it does all reside within one programmatical environment, where data is labelled with what it is.

Here’s how we’d analyse the output of vmstat “the Pandas way”. First we generate a csv file with source data:

We can let this run, the file will grow as it happens. This takes the timestamped output from vmstat but replaces the UTC field in the header by two fields called ‘Date’ and ’time’ - since it is actually two fields.

Next up we load this csv file into Pandas:

The second line converts the pretty printed vmstat timestamp into a ’native’ Pandas timestamp. Note that we explicitly say these are UTC timestamps.

The final line then blesses the newly generated timestamp field as the index of our data.

I agree this was some pain compared to gnuplot, but our reward is swift: 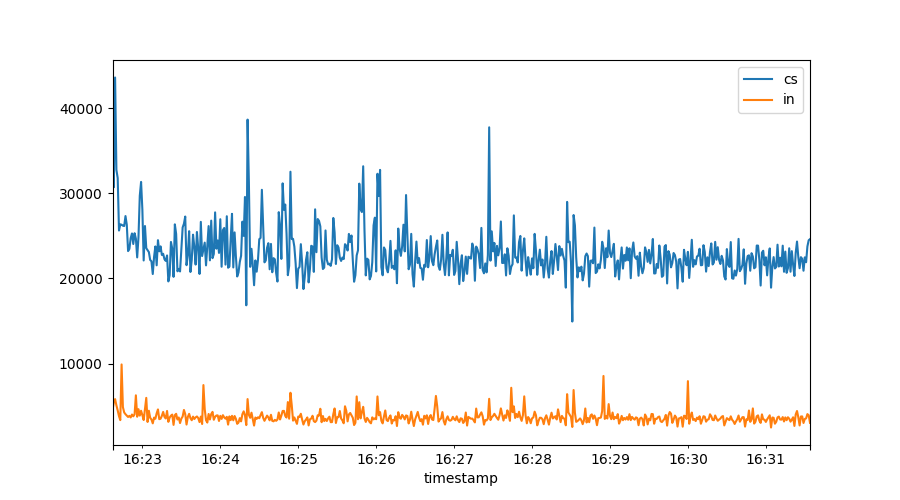 All vmstat fields are available for plotting. Note how the graph is automatically time aware. There is also an automated legend to show us what we plotted.

From this graph we see there might be some kind of relation between the number of context switches and interrupts, let’s see if we can tease it out: 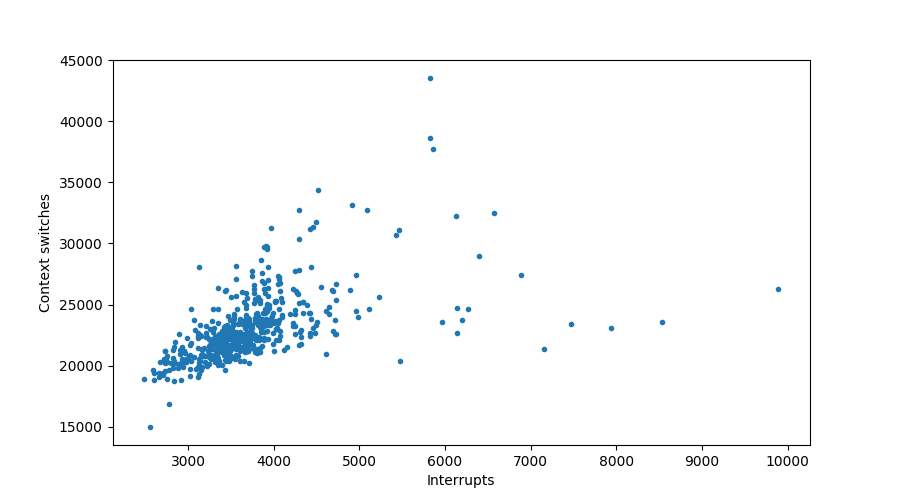 But does it scale? All this newfangled stuff, surely it can’t deal with millions of lines? Turns out, the Pandas people have been at it for a while. I routinely process tens of millions of datapoints with Pandas and read_csv is up to it. read_json not so much though!

Often we will want to look at noisy data, which we can best do through the lens of a time window. For example, if we naively plot the ‘us’ percentage of our system, we might get this graph: 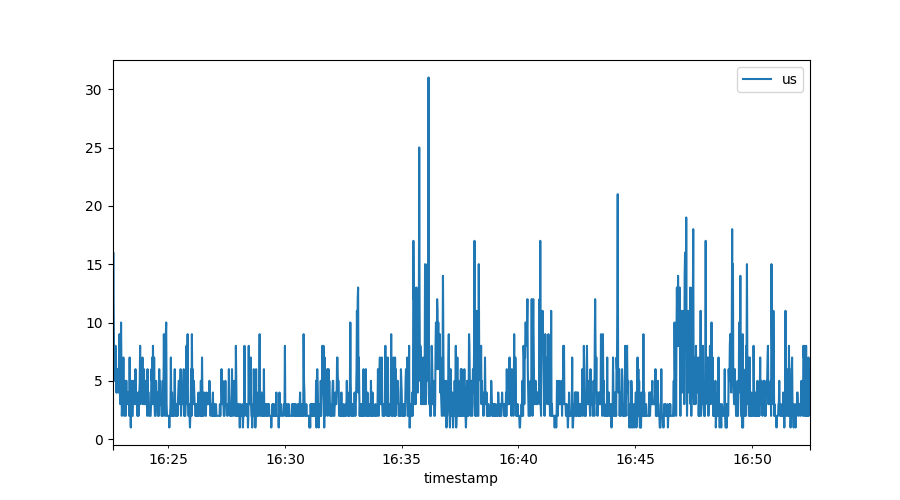 Because we have per-second resolution (which is great!) it is hard to spot trends in here. Pandas, the data component, has very strong support for defining time windows: 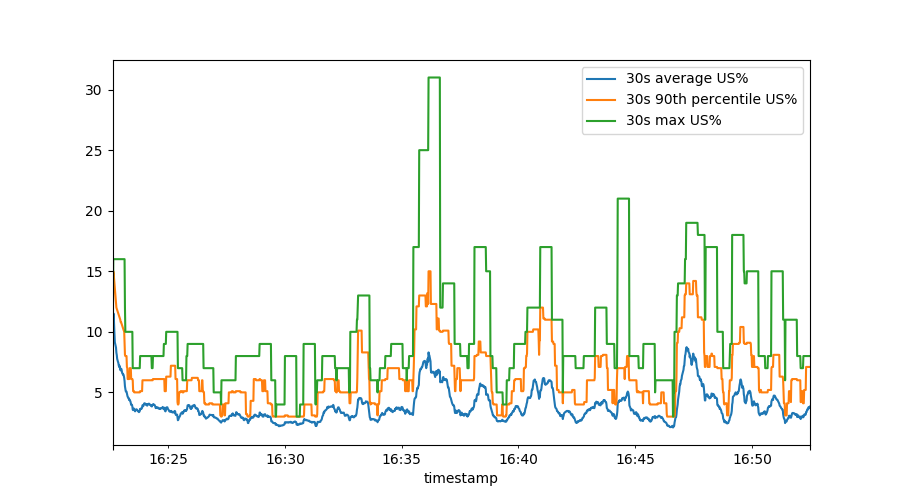 This shows us, over a sliding 30 second time window, the mean (average) user percentage, the 90th percentile and the maximum. To make this really pretty, we can do:

The third line is somewhat interesting - this calls on Matplotlib to fill the area between the minimum and maximum user CPU percentage, but uses the original timestamp from the data variable. 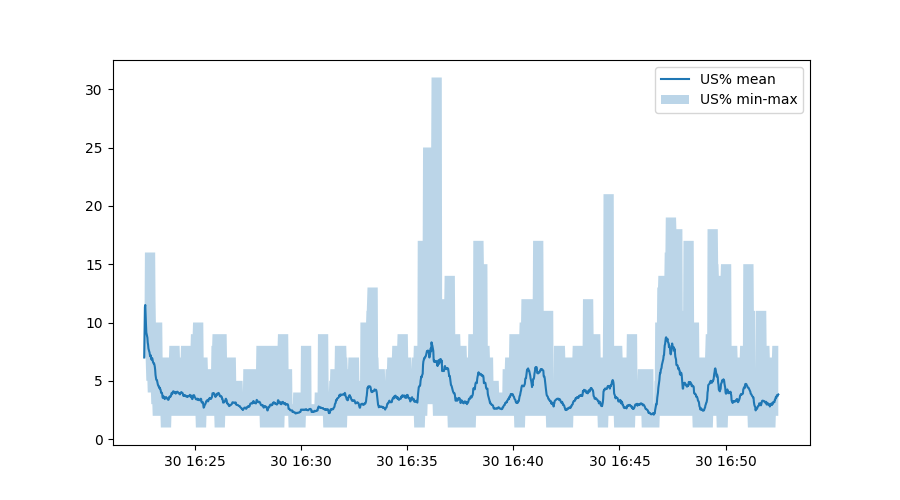 We’ve been using the data variable for plotting purposes so far, but much more is possible. A wonderful command is .describe():

This provides a summary of our data (where not all fields fit on this screenshot). But already this summary tells us something - we have 1793 lines of data. And apparently, our system does sometimes swap data! Both si and so are mostly zero, but not always. From the 25%, 50%, 75% percentile numbers (which are all zero) we can see these swap events must have been bursts.

We also see that at one point, 10 processes were running at the same time. Let’s see how often we have a lot of active processes: 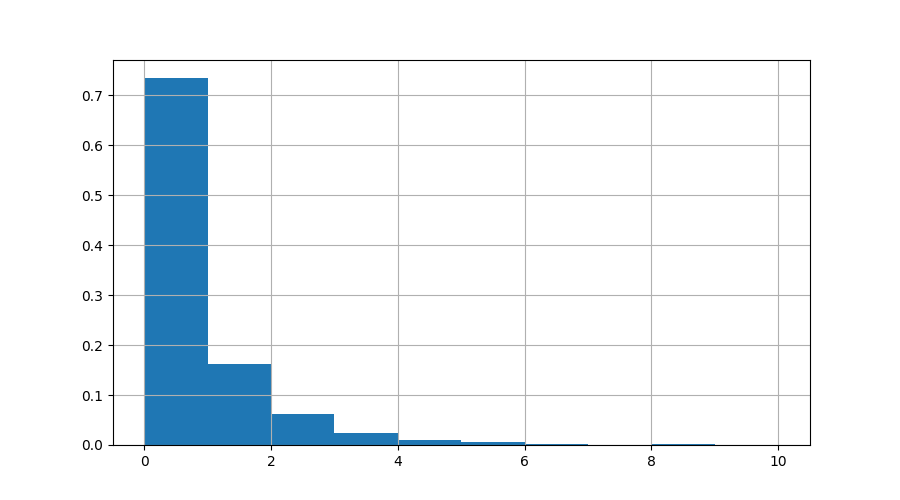 Here we can see that >70% of the time, nothing was running. The number of times we had 10 active processes was tiny. Let’s zoom in on the times when more than 7 processes were running:

Often you may want to stack data, something that is very difficult within gnuplot. In Matplotlib & Pandas it is trivial: 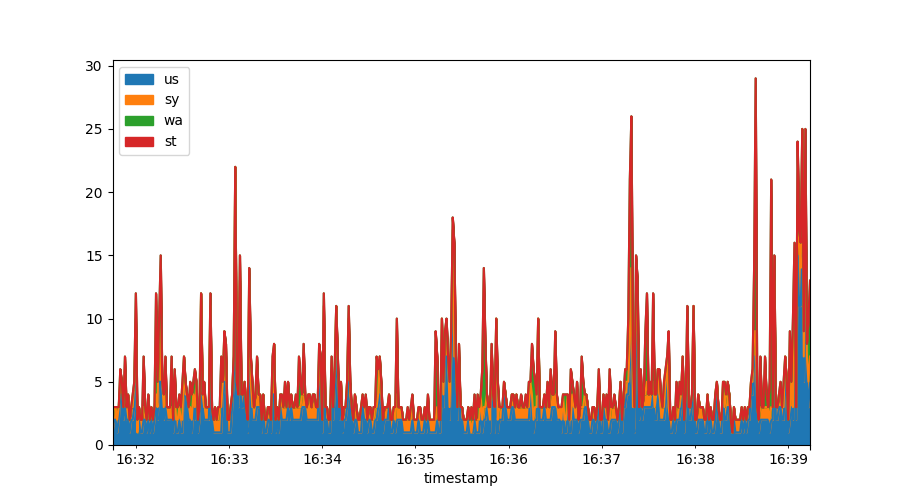 Oftentimes we will get metrics that represent things like “the number of bytes read since startup” - to make any sense of these numbers requires us to take a derivative. In this section we’ll cover how Pandas deals with this.

First, we’re going to collect some more data, this time on disk operations:

Run this as ./diskstat > diskstat.csv and it will measure how our devices are doing, every second. After this has run for a while, load up the data:

This follows the same pattern as earlier, except this csv file requires no preprocessing in terms of skipping lines or joining fields. On line two we bless the output of date +%s as the timestamp and again mark it as UTC. The unit='s' part tells Pandas these are unix timestamps. We then bless the timestamp as our index & output the first 10 rows to check if it all parsed right.

/proc/diskstat offers us counters on disk operations, and with one exception, all these counters increase monotonically. Here is how we would graph the io bandwidth of sdb:

We first select only data from device sdb and then plot the derivative of the number of sectors read and written, multiplied by 512 to get to the number of bytes: 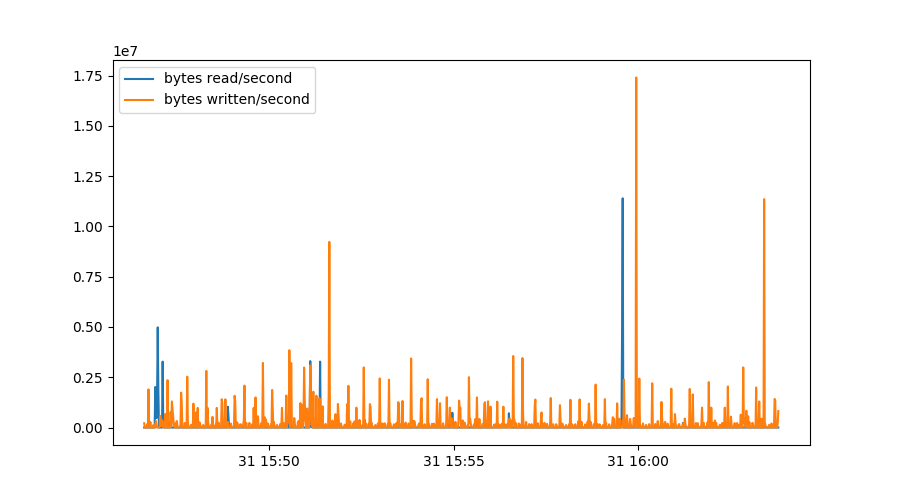 Some things should be noted about this graph. We could simply use diff() to get per second graphs - because this data was collected every second.

Since we’re using a real programming language with serious scientific packages, we can do way better:

The first two lines determine the gradient of our rdsectors metric as measured over the actual timestamps, converted to nanoseconds in this case. This makes sure our graph stays correct even if samples weren’t collected exactly every second. Note that np.gradient uses a more sophisticated algorithm that actually involves three datapoints instead of just the difference between two lines, which explains why the peaks are slightly broadened in this graph: 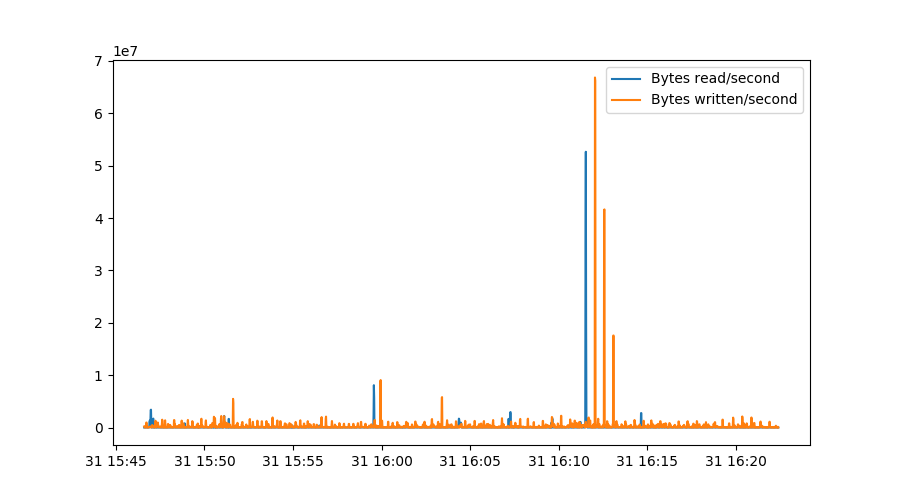 To combine datasets, collected from different places, often requires us to match up data with non-coincidental timestamps. Think of two systems being polled every 30 seconds.. but not exactly on the same second.

In addition, datasets may be noisy at small timescales yet exhibit trends on longer scales. For example, our diskstat data contains both the number of read requests and the numbers of sectors actually read. If we want to find out the average read request size, we need to divide these two numbers by each other. If we do so on a per second basis, we are unlikely to get a meaningful graph as some requests may be issued in second n but only executed in second n+1.

Both combining data with slightly different timestamps as well as doing math on noisy data are solved by the Pandas resampling facility.

In the first line, we resample the naive diff() of the number of reads at 5 minute intervals. In the second line we do the same for the number of bytes read. The next two lines repeat this for writes.

The plot.plt() lines are interesting because they show how resampled series can be used for calulations. 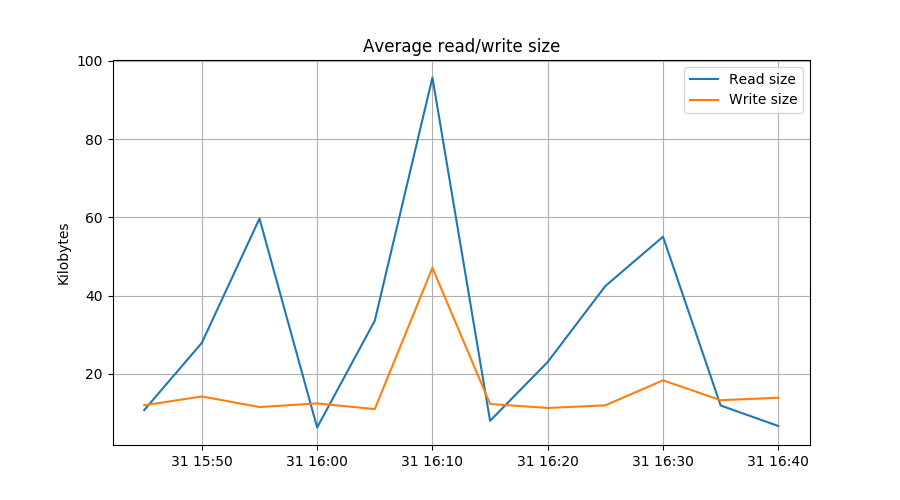 Pandas, the data component, offers many ways of selecting data. For example, let’s say we want data from only device sdb, we could do:

This would select only sdb’s wrsectors metric, calculates its derivative and tell us the 99% percentile value - a metric of the read performance a disk would have to provide to keep this system satisfied 99% of the time.

Alternately, selection can happen with:

This syntax looks nicer but is a bit more fragile. Finally, to ‘&’ selections needs some special handling:

Ok, enough of this hotness, how do I get started?

The easiest way to use Matplotlib & Pandas is through Jupyter. This is a webbased environment that offers a smart “CLI” interface to Python, except that it is graphical and you can do and redo commands at will.

Jupyter either comes with your operating system or you can install it with pip3, like this:

You can then start Jupyter with something like jupyter notebook or perhaps ~/.local/bin/jupyter notebook. This will launch a webserver and will point your web browser at it.

Then start a new Python3 notebook and paste this into the first cell:

This sets up sensible defaults. Then press the little ‘Run’ button and it will execute the first cell. 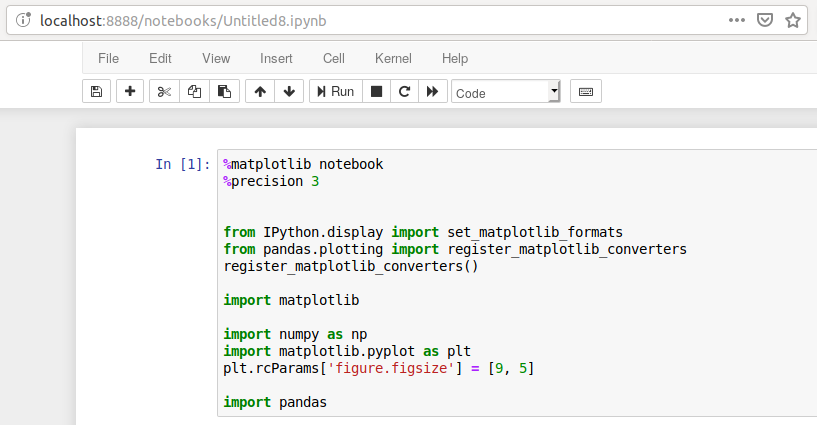 You are now ready to go! I have published the source of this article, the Jupyter notebook, the diskstat tool and a diskstat.csv and vmstat.csv dataset on GitHub for you to explore.

For further reading, the Matplotlib and Pandas documentation are good reads.

In addition, Matplotlib and Pandas are incredibly well served by searching the web. Almost any question you have will have a pretty decent solution on the first page.