The Netherlands is struggling with a shortage of primary school teachers, which as a nice side effect means that I get ample opportunities to do technical propaganda in the name of education.

This is a quick writeup of a lesson on how GPS (or in general, satellite based navigation) works. I’d like to thank Jasper Vos and Michel Dingen of OBS De Notenkraker for the opportunity & the very useful feedback on the lessons!

10-11 year old children mostly have phones here, and almost all of them turn out to have location sharing turned on with their parents. They also use their phones while on holiday to figure out where they are.

A smattering of kids here knew that phones use satellites for precise positioning, and one or two even know about GPS. So that is good!

It also turns out there is healthy interest in discovering how it actually works.

The lesson as outlined below was very successful in one class, and still worked very well in another. A lot depends on the enthusiasm of the teacher & mood of the class. It is definitely a stretch to do all this in 45 minutes. The most advanced students easily make it, it is hard work for the rest.

If I teach this lesson again (which I will), I would change a few things to make it fit better, and this is noted here and there on this page.

The goals for this lesson are:

The presentation can be found here. First we establish how GPS positioning is used in everyday life. Airplanes, ships, typical holiday activities. Plus I mention Hansel and Gretel, the fairy tale, where I note that would have ended a lot better if they didn’t have to rely on breadcrumbs and had satellite navigation. 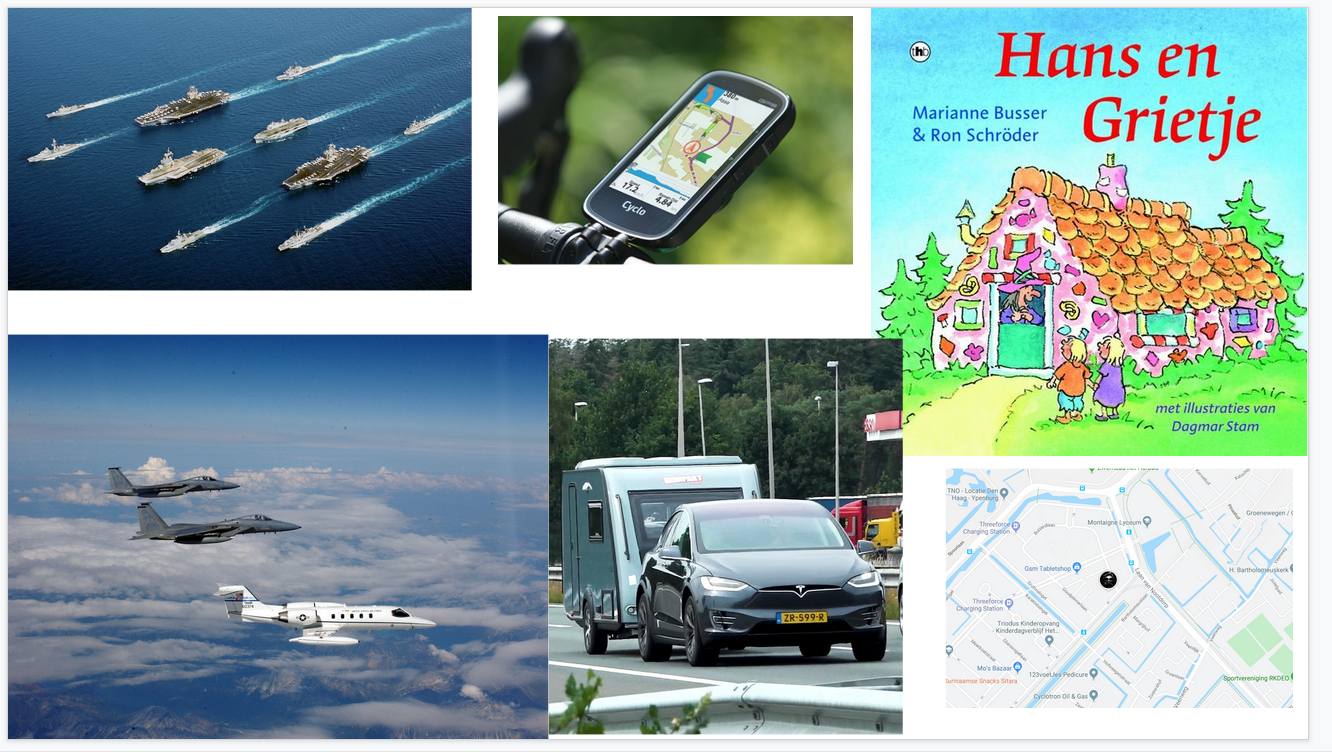 Ask everyone if they have a phone, if their parents track them using the phone, if they use it to find their way etc, on holiday. They all do. Explain how difficult life would be if “GPS” ever broke down. 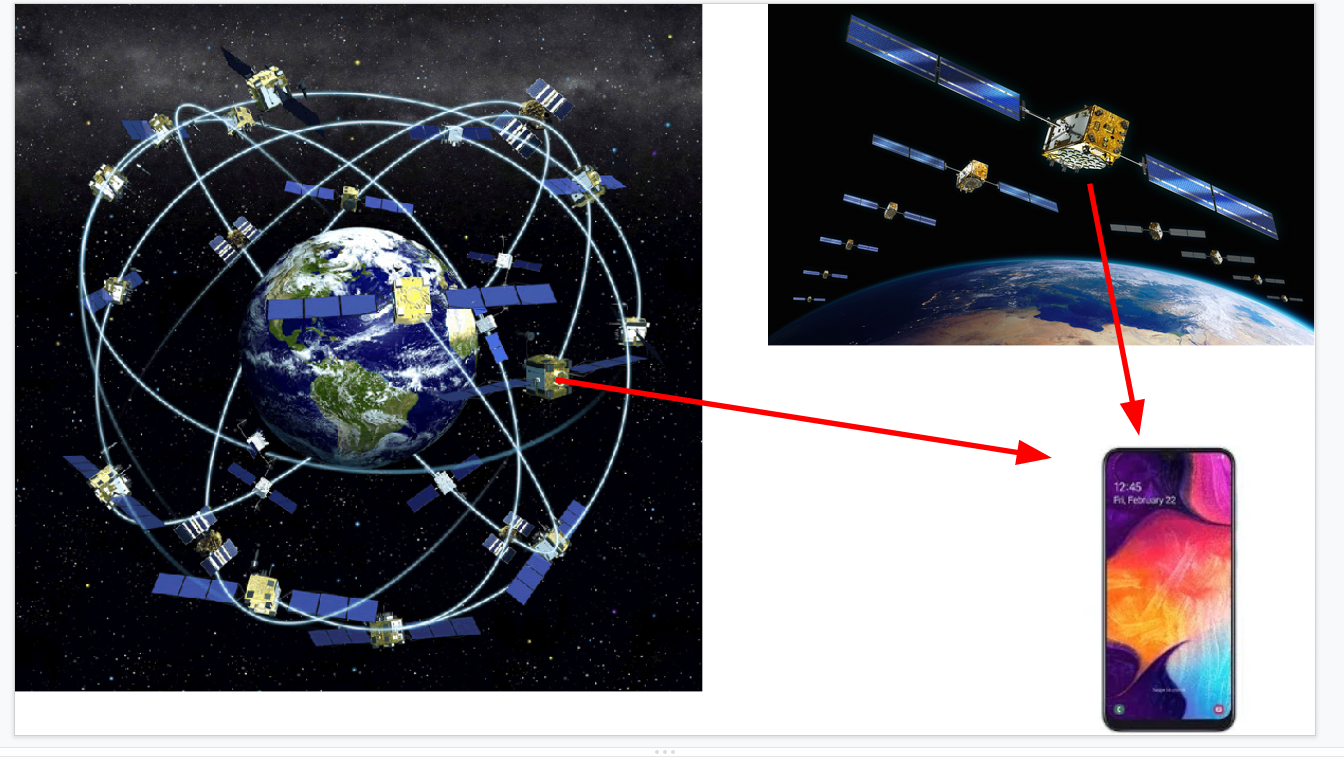 Next up, slide with pretty satellites in a constellation plus some arrows pointing at a phone. Spread the news there are over 100 GNSS satellites, from the US, Europe, Russia and China. Over 100! All talking to your phone!

I also mentioned the cost at this point, which for the EU’s Galileo is around 10 billion euros “or 20 euros per European in total”. Most will agree this is a pretty good deal. No one could imagine a life without satellite navigation, even if they got their 20 euros back.

Some pictures of how people used to navigate - giant books full of maps that everyone had in their car, pictures of sextants. It is great to note that for a while ‘celestial navigation’ (by the stars) disappeared, but that the US Navy has now decided to reinstate it because of fears GPS might one day get hacked. Stress that this is a very advanced topic, and that people used to train for years to become good at it. 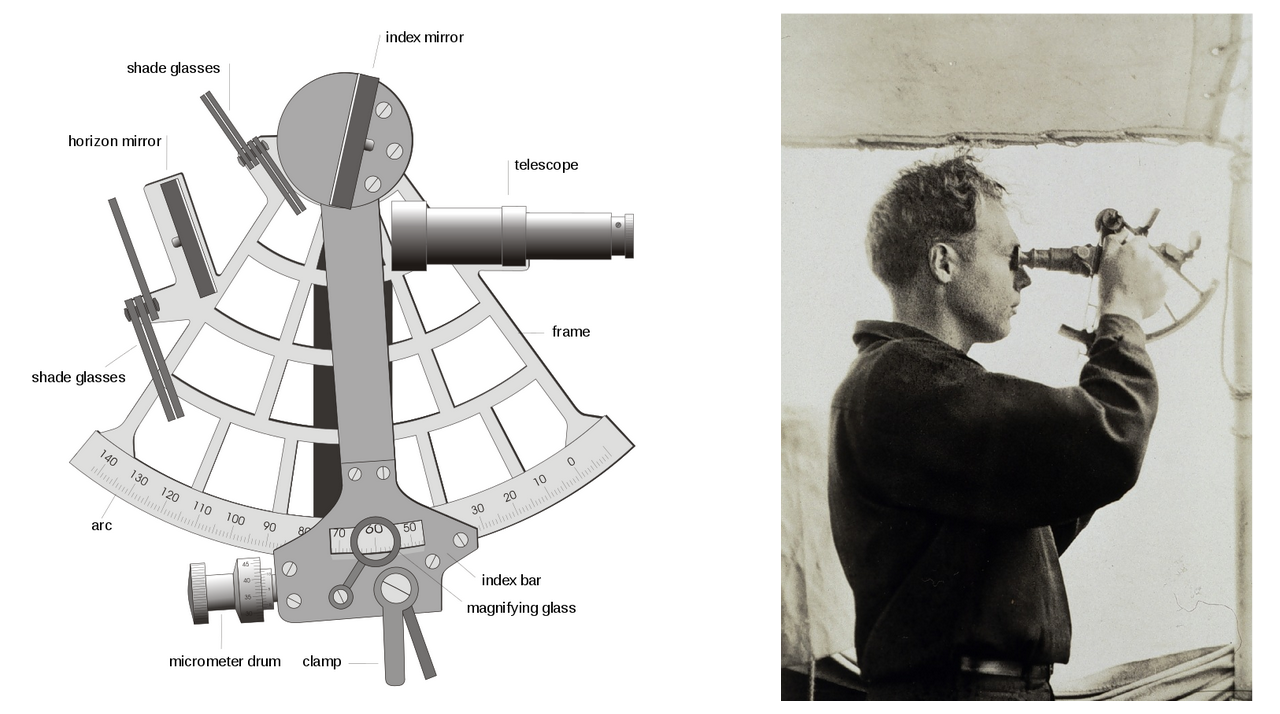 Then I showed a big rocket launch of 4 Galileo satellites. Fascinatingly enough, BOTH classes independently worried about the environmental impact of 25 of such launches to send up 100 satellites. I did mention that the fact that we can now all drive straight from A to B likely also saves quite some fuel.

Many kids are familiar with the delay between the flash of lightning and the arrival of the boom. Some will also know the rule to count the number of seconds and divide by 3 to get how many kilometers the strike is away.

To drive this point home, the presentation shows the spectacular video of the explosion of the Proton-M carrying three GLONASS satellites in 2013. 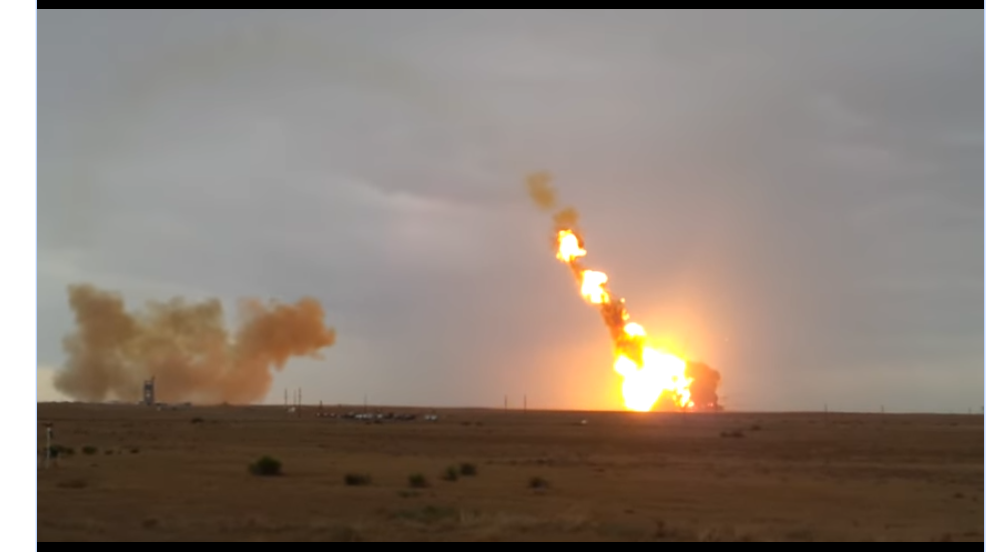 The delay between ignition and arrival of noise is around 6 seconds, the delay between the big explosion and the sound is around 8 seconds. It is fun to count this and the video is worth showing at least twice.

I then explain how if lightning were to strike right now, we might only hear about this (at school) after 2 seconds. Someone else sitting at home might however be closer and hear it after 1 second already.

This is all illustrated with maps and circles, and by a lucky coincidence, the “two-second circle” around school exactly touches the “one-second circle” about someone’s home. This is of course no coincidence, most circles will intersect in multiple places, but that would cloud the story. 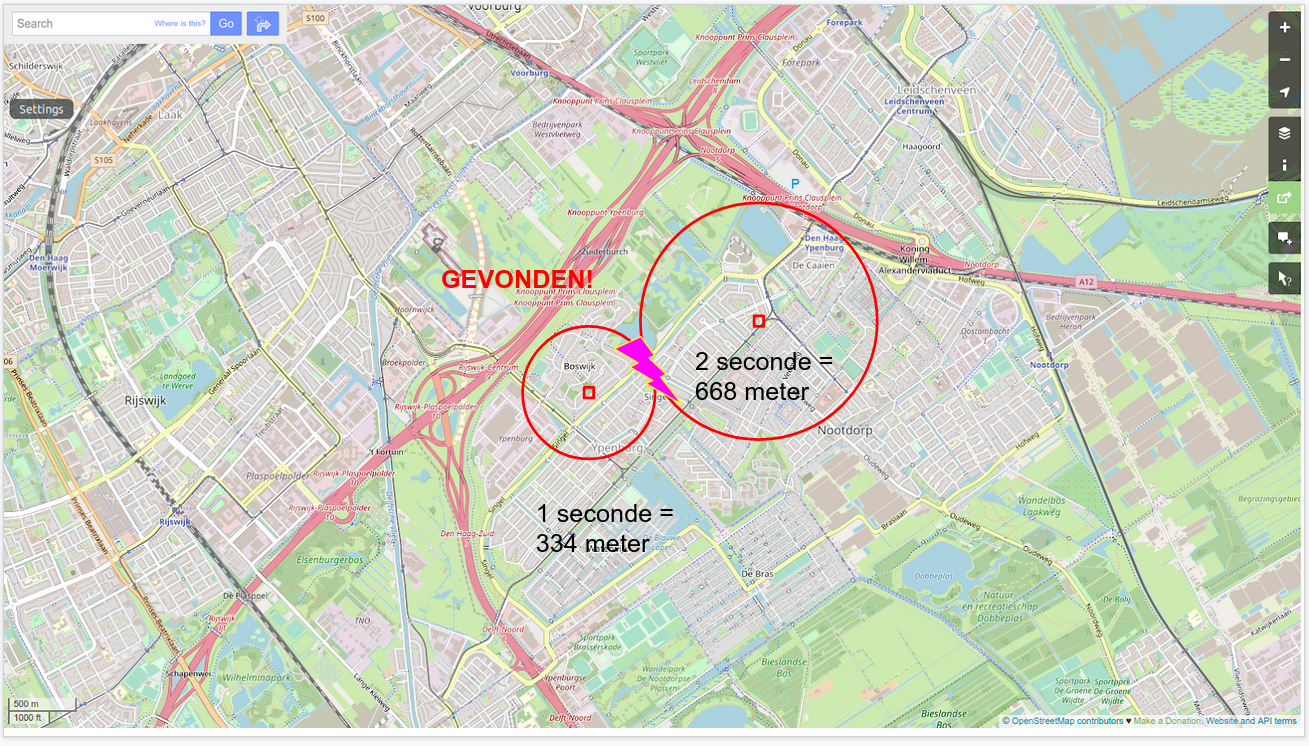 It is very important to drive home how this works - if you have ‘1 second’ and ‘2 second’ delays from two places, you can find out where lightning struck. You can explain later that you might need a third place, but let’s not overcomplicate it yet.

The scenario is, you are lost, it is dark, and GPS has failed. You have no idea where you are, but you do have three friends with big pieces of fireworks: 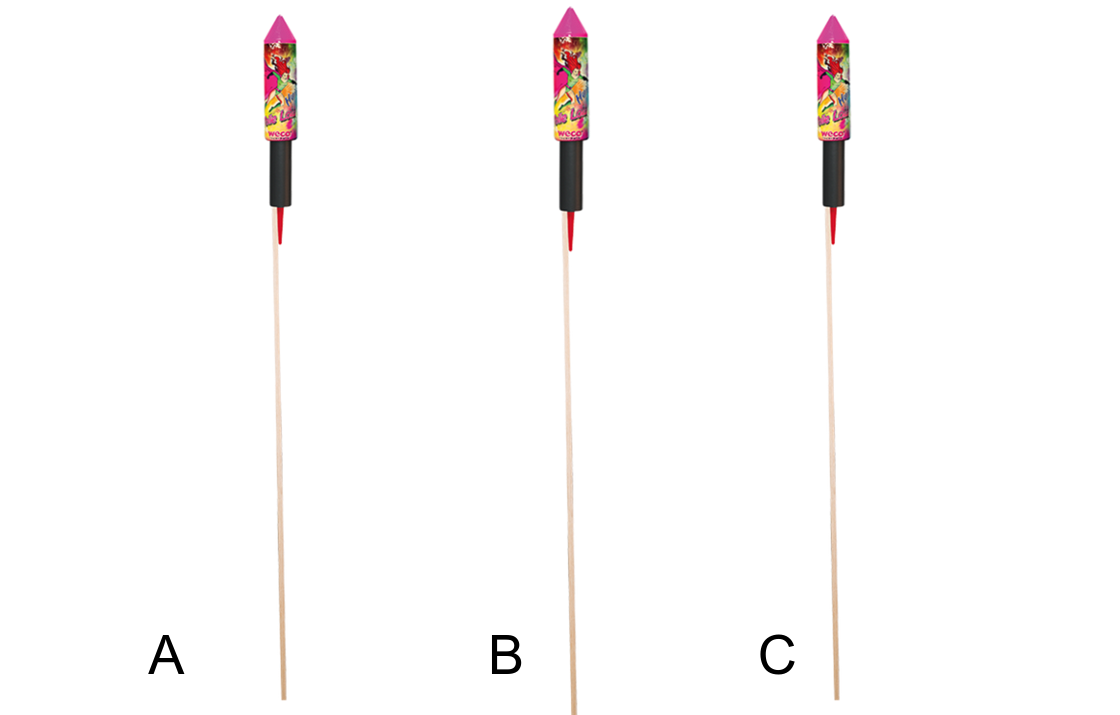 To find out where you are, you ask your three friends to launch their rockets in turn, and count the seconds between the flash and hearing the bang. 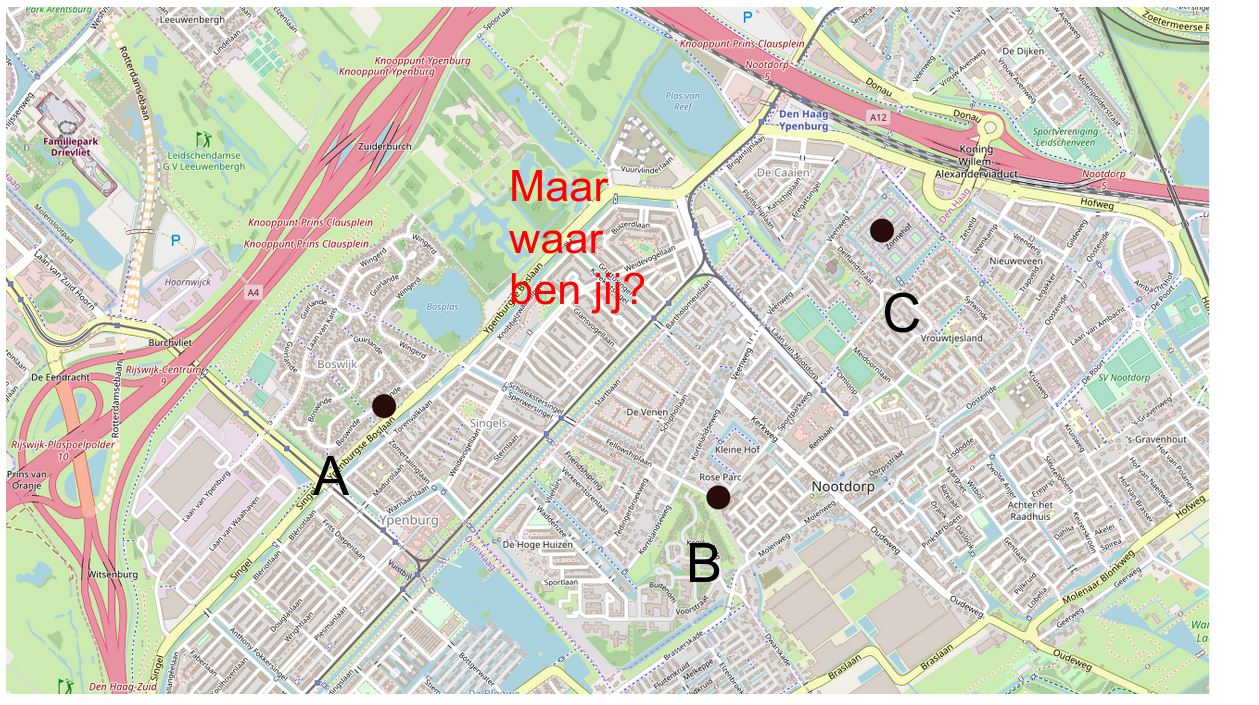 Now, this is where I messed it up somewhat. On the map, I had measured the distances, and figured out the delays from our unknown location: 4 seconds, 1.257 seconds, 2.215 seconds. It turns out these numbers were needlessly difficult.

All those decimals confused some kids who came up with very precise answers that were actually different from the nicely rounded ones I started with. So in my numbers, this corresponded to 1340 meters, 420 meters and 740 meters respectively. But if you calculate it exactly, you end up with slightly different numbers.

Now we all know that 420 meters and 419.98 meters are “the same”, but turns out, these school kids did not think that way. I spent a lot of time unconfusing kids that their 419.98 meters answer was very good and in fact better than mine.

Key lesson: next time round fudge the numbers so they come up roundly

I then handed out a map, which was at 1cm = 200 meter scale. The goal was for the kids to then draw circles around points A, B and C using a compass tool (“Passer” in Dutch). It turns out that most kids have no experience with this tool, and we lost quite some time getting them acquainted with the none too great compasses available.

I’m not sure how to improve on this. Check the compasses beforehand that they work well. Spend a moment getting the kids to draw circles with them (not on the map) to practice. The school may be willing to do this exercise with the kids before you show up.

It may also be possible to skip the compass and use a piece of rope, but I’m not sure if that would be any faster.

It also turned out to take a little bit of time to explain the scale of a map, and how ‘1340 meters’ in real life turns into 6.7 centimeters.

In both classes, all kids ended up drawing the circles around A, B and C correctly, and everyone found their location. 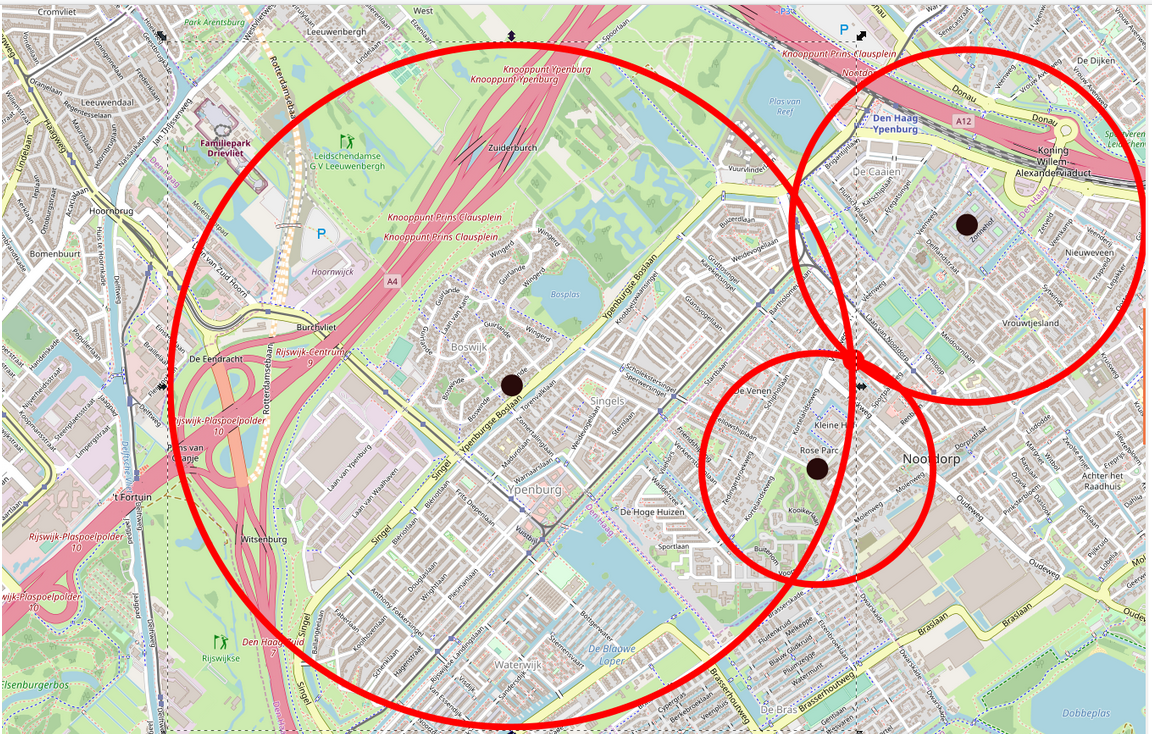 This was helped by the presentation on screen showing the correct results after each step, so that if someone missed one calculation, they could still go on to the next step.

The translation to GPS

Now comes the very tricky bit, and don’t feel bad if this translation doesn’t quite work. The goal was to excite people about technology, not to turn them into full-fledged satnav engineers in one hour.

Then explain how all the 100 navigation satellites are like little pieces of fireworks, except they go ‘boom’ exactly once every second, “for example, exactly at 12 ‘o clock, and then one second later again, and one second later once more etc”. The mental image of 100 satellites sending little pings at you is very evocative.

I then explained how a phone does exactly what we just did with the circles. Some satellites are closer so the ‘ping’ arrives earlier, other satellites are farther away and the ‘ping’ is later, leading to a larger circle.

‘So if your phone figures out where you are, remember, it listens to the pings from the satellites, draws big circles, and where the circles come together: that is where you are’.

There is a healthy interest in satellite navigation. You can usefully explain how to localize lightning strikes or yourself using fireworks. The translation to GPS is quite a leap, but as long as the key concept sticks, all is good.

Next to the presentation I also made a short exercise sheet where students can fill in their answers.

Feel free to use this in your own presentations, and please let me know on bert@hubertnet.nl how it works out for you!