A brief review of Stefan Zweig’s 1942 book “Die Welt von Gestern: Erinnerungen eines Europäers”, which I read in the earlier English translation by Benjamin W. Huebsch and Helmut Ripperger (public domain copy). There is also a more recent translation by Anthea Bell, The World of Yesterday: Memoirs of a European. It too appears to be excellent. 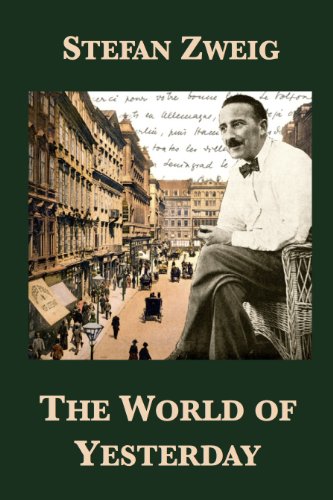 It is not often that one feels the urge to review an 80 year old work, but it left such a huge impression on me that I simply must tell you about what I’ve just read. Especially since there is a lot of scary resonance with our current times.

It is a remarkably odd book. The title is already somewhat of a hint – this is not a memoir of Stefan Zweig the person. Although we do learn of his impressive artistic and literary achievements, he barely appears in the book himself. This is a memoir of a lost Europe, and how we lost it, in the First World War, during the run-up to the Second World War and finally during that war itself.

It has been said that “Reading good books is like engaging in conversation with the most cultivated minds of past centuries” (René Descartes). In a sense, books are like time machines.

Stefan Zweig lived through extremely important and interesting times. And sadly, his experiences are relevant again. With today’s rise of fascism and extreme right wing parties around the world, I used to compare our current situation to the 1930s. The book correctly notes that:

And although history does not repeat itself, it often does rhyme. And our current situation rhymes best not with the run-up to the Second World War, but much more with that of the first. Scarily so.

Here in The Netherlands we don’t dwell on the First World War that much, perhaps because we stayed out of it and probably (as is our way) profited handsomely from the resulting trade.

Striking is Zweig’s description of how people felt during the run-up to the First World War. Surely it could not happen, surely wiser heads would prevail, the treaties say the peace will be maintained, and even if not, it is far away and it will stay there, and no one could possibly disrupt our secure affluent lives. And then millions died.

“Neither banks nor business houses nor private persons changed their plans. Why should we be concerned with these constant skirmishes with Serbia which, as all knew, arose out of some commercial treaties concerned with the export of Hungarian pigs? My bags were packed so that I could go to Verhaeren in Belgium, my work was in full swing, what did the dead Archduke in his catafalque have to do with my life? The summer was beautiful as never before and promised to become even more beautiful—and we all looked out upon the world without a care. I can recall that on my last day in Baden I was walking through the vineyards with a friend, when an old wine-grower said to us: “We haven’t had such a summer for a long time. If it stays this way, we’ll get better grapes than ever. Folks will remember this summer!””

The wine-grower was right.

In the book, Zweig meets and befriends many of the leading writers, intellectuals and artists of the day. He’s mostly awed by the people he meets, and we have to accept that he led the kind of life where you casually bring your friend Salvador Dali to a meeting with Sigmund Freud.

Zweig first describes the intense pre-war stability of Vienna and the upwards swing of life. Through his life and observations he then takes us through the rich artistic world he inhabited, a world in which at first opinions and works of writers and thinkers held great sway. Dictators sought the approval of intellectuals.

Angry denunciations in newspapers actually deterred governments from doing bad things. This still worked in 1910, but soon the barbarism of the 20st century blew all that away.

His contemporary description of the arrival of fascism in Germany and Europe is somewhat at odds with how I understood it. Zweig singularly blames Hitler in many places, but also notes a few times how well funded his movement was.

Apparently, captains of industry started massively financing right wing movements at an early stage. A lot to ponder there.

One of the joys of the book is that Zweig himself often remarks that only future study can really tell us about a person or situation. And because we live in 2022, a lot of that future study is just one Wikipedia article away. As an example, on Karl Haushofer, inventor of the concept of Lebensraum:

“But there can be no doubt that it was his theories, rather than any of Hitler’s most rabid advisers, which either consciously or unconsciously drove the aggressive policy of National Socialism from the narrow national to the universal; only posterity, with better documentation than is available to our contemporaries, will be able to place him in the proper perspective of history.”

The question here is if Haushofer is to blame for the rise of Hitler. Fascinatingly it turns out that even in 2022 opinions are divided. Many other fascinating people are mentioned in the book that are very worthwhile to look up to see what happened to them.

In rare places, Zweig does speak about himself. In a somewhat self-referential paragraph, he describes how he winnows down his prose to the absolute minimum:

“And if I am aware of any art of my own it is that of being able to forego, for I make no complaint if of a thousand manuscript pages eight hundred make their way into the waste basket and only two hundred—the essence—survive the sifting.”

I think he applied this lesson to The world of Yesterday as well - by not dwelling on the vast majority of his own life, we have all the more room to read about Europe. It is only indirectly that we learn that Stefan Zweig had a wife, or that he was actually very rich. He casually mentions buying ‘a house in Salzburg’, for example. Here is the house: In this light touch way, his life is merely a scaffold on which to hang the wild story of perhaps the most interesting sixty years Europe has ever experienced.

There are inspirational parts as well, like the need for reinvention, which particularly struck me:

“I loved my work, hence loved life. I was protected from material worry; even if I never wrote another line my books would take care of me. It seemed as if there were nothing further to be achieved, destiny seemed to be tamed. The security which I had known of old in my parents’ home and which had disappeared during the war, had been recaptured by my own efforts. What more could one wish? But strangely enough, the very fact that I had no desire in this hour caused me private discomfort”

“So, on this fiftieth birthday, deep within myself I had but one wicked wish – for something that would once more tear me away from all these guarantees and comforts, that would necessitate my not merely continuing, but my starting anew”

Sadly, he got what he wished for.

I could make this page far longer, but in Stefan Zweig’s spirit, I won’t. If you want to delve in, here is a supposedly public domain copy, or head to any decent book store.